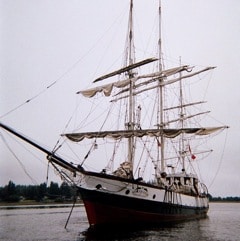 Bruce MacDonald, author of Sisters of the Ice writes:

Climate change is affecting our whole planet and one of the areas in the world that is most impacted is the Canadian Arctic. With longer periods of open water there is more traffic going through or attempting to go through Canada’s NW Passage which has raised concerns about environmental impacts, policing, fishing, mining, and ultimately Canada’s sovereignty over this area.

I began researching the above with a look to the future but soon became engrossed in the stories of the ships and sailors who have defended Canadian Arctic sovereignty thus far. The two iconic Canadian ships that I focused my research on were the RCMP’s patrol vessel, St. Roch, that policed the western Canadian Arctic and then became the first vessel to transit the NW Passage in both directions as well as the first vessel to circumnavigate North America; and the Inuit owned fur trading sailing ship, North Star of Herschel Island, that was used twice by the Canadian government to assert Canadian Arctic sovereignty. The captains of these two vessels were good friends and they often met up in port or in the Beaufort Sea for a gam.

In order to set the stage I looked further astern to the foreign whaling vessels that first caused the Canadian government concern when they operated their vessels with impunity for years in the Arctic. I wrote about life-long sailors such as Joseph-Elzear Bernier who when he was a teenager was lashed to the forward windlass on his father’s lumber ship during a storm in order to cure him of seasickness. Bernier went on to command his own ship and claimed the Arctic Archipelago for Canada after many seasons in the ice.

My wife and I purchased North Star of Herschel Island 25 years ago and raised four children aboard while logging thousands of miles in the Pacific NW. Through those years we met many people who shared their stories of life in the Arctic, including those who had spent time aboard St. Roch and North Star up north. Their first-hand accounts that have never been recorded before are an invaluable part of this new book.

As a sailor I was drawn to the experiences of those who worked these waters; the storms, the groundings, the navigation in uncharted waters, the shipwrecks, dealing with the ice, and all of the adventures that these people had in defending Canadian Arctic sovereignty.

Sisters of the Ice retells these stories of the hardships and seamanship that were used to protect this area. It is an overview of the subject but ultimately is a collection of true Canadian sea stories that, alas, we were never taught in school. 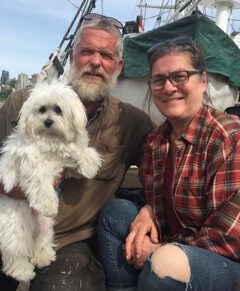 R. Bruce Macdonald is a writer, sailor and artist with a passion for Canadian history. The cover art on the book is one of his paintings. Macdonald has logged over 100,000 nautical miles and, for many years, has lived along the BC Coast aboard North Star with his wife and daughters.